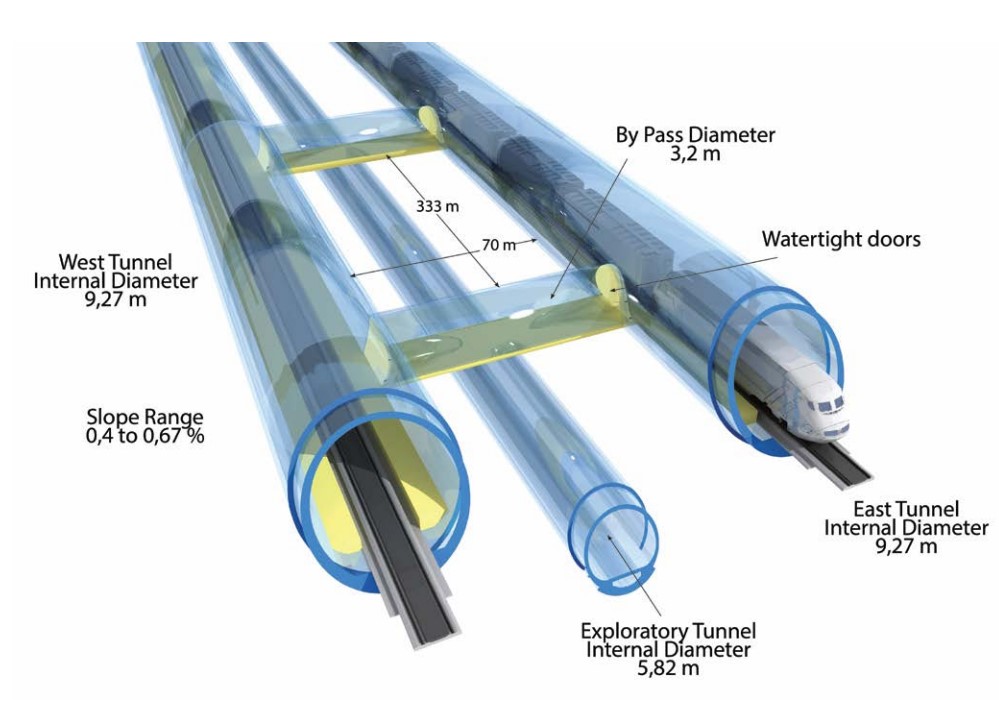 Nowadays, you can get almost anywhere in Europe by train. London, in the United Kingdom, is connected with Amsterdam, in The Netherlands, by a railway. People can take a train from Zurich, in Switzerland, and travel all the way to Budapest, in Hungary. Yet, one route that has always been difficult to traverse, is travelling from Austria to Italy through the Alps.

The new line through the Brenner Base Pass

The passenger and freight traffic going through the Alps has grown significantly in recent years, and it is expected that it will grow further. Austria is an important country for the transport of freight between northern and southern Europe, as well as between eastern and western Europe. The Brenner Pass is a mountain pass through the Alps, which forms the border between Italy and Austria. The pass is very politically sensitive when it comes to issues in regard to both local and cross-border transport and is one of the most heavily jammed routes in the Alps. This is related to the pass being one of the few roadways that can be traversed throughout the year, so it is very popular for freight crossing the mountain range. Nowadays, around three-quarters of the traffic going through the Brenner Pass is carried by road transport. Local residents across the Alps have fought for relief from the pollution caused by road traffic for a long time. The construction of a rail tunnel in the Brenner region is considered to be necessary for traffic to shift from the roads to rail by its supporters. This will help to preserve the future of the environmentally vulnerable Alpine region.

The new line is expected to cut travelling time between Innsbruck and Bolzano from about two hours at the moment to less than an hour. The new line is called the Brenner Base Tunnel, and, will become the world’s longest underground rail connection once it is open for use. The tunnel will transport travellers from Innsbruck across the Alps and into Fortezza in Italy. Once the tunnel is connected to the underground rail systems in Innsbruck, known as the Inn Valley Tunnel, the length of this underground railway will total 64 kilometres. For this reason, passenger and freight trains along this stretch will not only pass the Brenner Base Tunnel but will also travel through the Inn Valley Tunnel for a few kilometres. This line will become the longest underground railway connection in the world. It is anticipated, that the Brenner Base Tunnel will be able to reduce the traffic on roads and highways once it opens.

Progress of the Excavations

Engineers started excavating below the mountains of Austria in 2015 to build the longest rail tunnel. They are in the process of constructing three tunnels as part of the project. By now, construction on the tunnels began seven years ago, and workers have three main routes to excavate, as well as escape chutes. They will also build emergency stations within the tunnels. Thus, the construction of the Brenner Base Tunnel is not going to be finished quickly. It is expected that the tunnel will not be open to trains until 2028. The cost of all this drilling is estimated to reach $11 billion.

In May 2018, Serena, a 300-metre Tunnel Boring Machine, began excavating an exploratory tunnel going from Italy (Alto Adige) to the Austrian border. It is a double-shield Tunnel Boring Machine with a diameter of 6.85 metres. After having tunnelled 14 kilometres for 3.5 years, Serena arrived at the Brenner Pass under the Alps. It was the first time the excavation works arrived at the state border. The arrival of the Serena at the border was greeted by the representatives of the local institutions, the Brenner Base Tunnel project and by the Italian Railway manager, RFI. By reaching the Brenner Pass, the first step in the construction of a continuous tunnel that will connect Italy and Austria had been achieved.